My wonderful Hitachi Magic Wand and the dilemma it has caused!

HitachiMagic.com received a story from a woman named Mary O’Docherty who has been on her own for three years, and enjoying her Hitachi Magic Wand continuously. She meets a new man, and is unsure whether to introduce him to her “toy.”

Hi there, my name is Mary O’Docherty and I am a divorced woman of thirty two from just outside of Dublin, Ireland. I live in a small town where everyone knows everyone else, and there truly is no privacy. As you may know, divorce is pretty much frowned on here, so when I became single again, some women treated me terribly. I think they believed that I was out to steal their man!

Well, nothing could have been further from the truth. My husband had treated me abominably, and he was the one to leave me, and so I wasn’t looking for another relationship for a while, thank you very much! The problem for me though was that despite the fact that our relationship in general had been horrible, we were well-matched in the bedroom department. When he left me, the only thing I really missed was the sex.

I tried a couple from different stores, but they didn’t ‘do it’ for me, if you get my drift. So, I was back to the drawing board. It seemed that the ones that women generally bought were just not right for me, for one reason or another. I wanted something more long-lasting, and also something which could be used for general massage purposes, and not only sexual.

I then discovered the Hitachi Magic Wand. This seemed to be able to do everything I wanted it to, so I ordered one. Not only did I use it to satisfy me sexually, but I discovered that it was wonderful on my aching muscles. I began using it almost every day, and boy, am I glad! I felt better in every which way. But my problem now, is that I have met a nice new man. Do I let him know that I use a Hitachi Magic Wand, or not? I don’t want him to feel redundant, but I don’t think I could do without it now. What do you think?

HitachiMagic.com’s response to Mary is as follows: 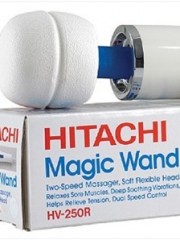 You have nothing to worry or be embarrassed about with the Hitachi Magic Wand. The great thing about this massager is it could be concealed and used as a regular massager because it really is that great! This new man in your life will find out, if he already doesn’t know, that the Hitachi Magic Wand has dual capabilities so don’t hide this fact for too long. Honesty is key in a relationship so disclosing the fact that you own a “vibrator” shouldn’t be a big deal for him. Who knows, he might even want to give it a spin on himself sometime!

Finally the Hitachi Magic Wand wins the attention of a man!

The Hitachi Magic Wand is not recommended for the weak