No the Hitachi Magic Wand isn’t ONLY used as an adult toy!

HitachiMagic.com recently got in touch with a lovely woman by the name of Joanna who was having issues with Chronic Fatigue Syndrome and fibromyalgia until she was told about the Hitachi Magic Wand. She turned to us for her purchase and we couldn’t be happier that she is feeling better. It’s one thing when the Hitachi Magic Wand is known as a sex toy, it’s another thing when it really helps someone who is not feeling as well as they should be. Read below for the letter Joanna wrote us. 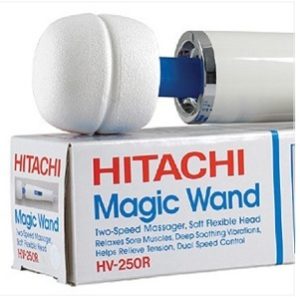 My name is Joanna and I am a thirty eight year old mom of two from Kissimmee, Florida. A few years ago I started suffering from extreme tiredness and the inability to cope with any form of exercise, no matter how ‘light’ it was. As time went on, I developed pain in my muscles that was excruciating to bear. I could not walk up the stairs in one try, and had to sit down half-way up.

I despaired and thought I was going out of my mind; I was either sleeping for twenty two hours a day, and not feeling refreshed, or alternatively I could only sleep for a couple of hours before the pain woke me up again.
My doctor seemed unable to help, and even suggested that what I was suffering from was depression. While I understood what he was saying, (because I was depressed,) I could not seem to make him understand that the depression came after I had been in pain for a long time. Anyone would feel depressed if they were in the kind of pain that I was in.
Eventually he sent me to see a specialist, and eventually, after many tests, I was diagnosed with Chronic Fatigue Syndrome, (C.F.S.) and fibromyalgia. I went home and did some research on these conditions, and while neither of them is curable, they can be managed to make the patient at least begin to feel better.

One of the recommended treatments was Cognitive Behavioral Therapy, (C.B.T.) which involved graded exercise. Unfortunately this did not work for me, and simply made me feel far worse. I was almost in despair by then as I had been in pain for such a long time. When I went back to see the specialist, she suggested something else to me. It sounded so simple; I could not imagine that it would work.

She told me to buy a Hitachi Magic Wand to use on my sore muscles to see if it would alleviate some of my symptoms. I sceptically ordered one from you guys and here I am a month later, feeling so much better. My Hitachi Magic Wand is not a ‘cure-all,’ but oh Lord, what a difference it has made to my life. My muscles are so much less tense, and I am sleeping a lot better as a result. Long may its effects continue! Thank you for providing such a great device!

The Hitachi Magic Wand is not recommended for the weak